Digitize a cassette tape with your husband’s gear

On January 1, 1976, my sister recorded cassette tapes of our grandmother talking. We never understood much of Grandma’s language. She came to an isolated farm in Alberta in 1934 from Poland. She rarely left the farm, and never learned to speak English, or to read or write in any language. She spoke a mixture of her mother-tongue, which we assume was a dialect of Polish, splattered with a few English words. In my memory, her voice was powerful and entertaining, and I always hoped that one day I would understand more than instructions and farm chores; that I would know the deepest reaches of her thoughts and feelings.

My sister always said she had the tapes, but I’d never seen them. So when, one day, she showed up with a tape recorder and two tapes in tow, I was very happy. She asked me to make a copy. Having such unique recordings is a treasure. As the cassettes are now over 40 years old, their quality is deteriorating. I want to preserve them and use them, to listen to them, and translate what my grandmother was saying.

I decided to make a learning project out of preserving the content of the tapes, and to share the process here in case others with old cassettes stuck away somewhere and can learn from my experience. Who knows where a project like this could lead?

I enlisted the help of my husband. He has recording equipment and experience. Although he had never done this kind of project before, he came to my rescue.

Use a practice cassette first
If you’re not sure, get professional assistance.

Gather the equipment
·      cassette player: you need a working cassette player with a line out
·      audio interface (we used a Scarlett 18i8). This piece of equipment allows the analogue signal to be adjusted and converted to a digital signal as it is transferred to a computer
·      digital audio workstation software (DAW) (we used Cubase for this project)
·      cords, computer, speakers, headphones, blank cd’s, practice cassette and screwdrivers

Troubles with tapes and tape decks
Tip 1:  Don’t throw away a working tape deck – your neighbour might need it one day. We tried four decks before we found one that was in good working order!

Tip 3: If your tape breaks and you can see both ends, you can splice it with scotch tape. If your tape breaks and you can’t find the ends, you may have to open the case to join the ends and transfer it to another cassette if the cassette gets broken. Not all cassettes have screws, which was our problem. In that event, you may have to pry the body open with a screwdriver, being careful not to damage the tape, and transfer the tape to a new cassette frame. I know all this because it happened!

Tip 4: Practice the transfer with a blank tape before you use the good one. I can't stress this enough! It’s a skill to learn how to move the roll from the broken cassette to the new one. Make sure you pay attention to the way the cassette gets put together as you take it apart.

In Cubase
1.     Start a new project and configure it so that Cubase knows what’s going on.
2.     Name the project

3.     Make sure that the signals are working: The left and a right channel must go through the audio interface, aka the analogue to digital converter
4.     Tell Cubase how to find where the signal is coming from
5.     Play a bit and check the levels
6.     Rewind the tape back to the beginning, carefully
7.     Press record on the Cubase
8.     Press play on the tape deck

I love reading picture books (they may even have saved my life when my kids were short). As a children’s librarian I got to present a lot of story-times and I believe picture books are suitable for people of all ages. Recently, in trying to recall some of my favourite titles, they eluded me. So I went to the library catalogue, and then the library itself to do some research. There I was, crawling around on the floor, pulling out books wedged spine-side up into the tiny cubicles of the children’s section, trying to identify hard-to-find gems. My first 3 suggestions fit a ‘cloth and culture’ theme. No surprise, as I love textiles, and all things fibre, yarn, fabric, sew, quilt, spin, knit, weave or felt related. That’s a pretty broad net, but you have to start somewhere. To deliver a good story-time, it certainly helps to be inspired by the book choices. 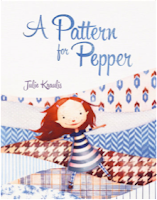 In this teaching story, Pepper learns about a tailor’s trade while searching for a fabric for her new dress. She helps design the pattern and wears her dress on a most special day, for an afternoon party. Houndstooth and ikat, pinstripe, toile and other designs are introduced, and each time she rejects them until the perfect one is found. I enjoyed this book because of the quality illustrations, the subject of fabric and clothing design, and the story of how Pepper comes to get a new outfit. This book could be a read-aloud for kids in grades 2-4, for talking about cloth and culture, dressmaking and tailoring from a European perspective.

The Cat and the Fiddle: A Treasury of Nursery Rhymes, Illustrated by Jackie Morris, Frances Lincoln Children’s Books, London, 2011

A Treasury of Nursery Rhymes is illustrated with bright watercolour paintings full of whimsy and the fantastical. Longhaired damsels in dresses of fine fabrics and animal companions adorn the pages. You will find dogs and horses, polar bears, mice, bats and weasels, ships and castles, as well as the odd knave. There were many familiar rhymes and a few new-to-me including, Baby’s Bed’s a Silver Moon, Little Thomas Tittlemouse and A Swarm of Bees in May. This book would be useful as a companion book for a K-2 story-time. I enjoy sharing one or two nursery rhymes with the kids to accompany a main story, and discussing folklore and the practice of reading pictures.

On the first day of school Suki wants to wear her kimono. Her sisters do not think it is a good idea because she might get teased. She wears it anyway and enjoys the attention she gets for performing a circle dance she learned from her Obachan. The book genre is realistic fiction and it would work for grades 1-2.
Tags: Japanese American culture, circle dancing, kimonos, cloth and culture, schools, peer pressure, grades 1-2
Posted by Gayle Sacuta at 2:13 PM No comments:

Gayle Sacuta
Gayle is a librarian, mom of three boys and lives in Devon, Alberta. She grew up during the seventies on a farm near a large, ancient glacial slough called Gough Lake. She writes about her life: librarianship, parenting/caregiving, food, rural Alberta, girlhood, and anything else that catches her fancy.